Softball Update and an Introduction

I know if I say we lost our last game 18-0 you probably wouldn’t expect me to follow that up by saying we’re getting better. But we are. My pitcher has been taking lessons and is much better than she was when we started the season. So good that the other team is now getting pitches to hit. Not so good because my players have never actually had to field a ball before and run around the field like drunk keystone cops, but at least the other team is earning their runs and we’re not walking them all in.

Now, to the new man in my life. He’s everything I wanted. Affectionate, loving, devoted. He has beautiful green eyes, is adorably playful, and totally healthy except for a few ear mites which we’re working on. Yes, that’s right, I’m in love with a kitten.

May I introduce, Bumblebee. 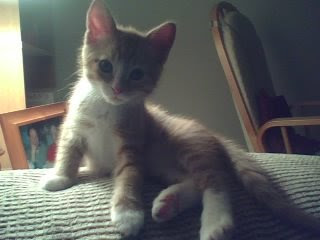 Is he not the cutest thing you ever did see? He’s nine weeks old, weighs just over two pounds, and really is everything I say above. He sleeps all night, curled up in my bed, wakes me at exactly six every morning for breakfast, and sits in the windowsill waiting for us to come home every afternoon. We’ve been together for one week and I already can’t imagine life without him. 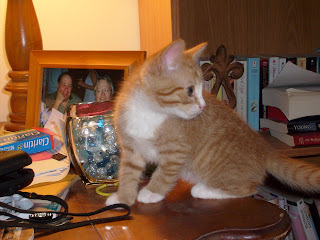 Kiddo is as much in love as I am so it’s going to be hard when she has to head half way across the country in a month to spend the summer with her dad. Someone asked if she was taking him with her and my instant response was “NO!”

Anyone else have any recent additions to the family they want to brag about? Any kitty or puppy stories? Hope everyone is having a good Memorial Day weekend!